Sunny, Sarah, and Stoo (the 'S' Club) at the class wind-up gathering. Read below for more details! 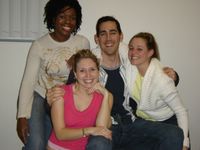 Check it out, I have a harem! no just kidding! a few of my fabulous PR classmates: (L-R) Michelle, Alicia, Sarah. thx to sonia for forwarding me the pic! 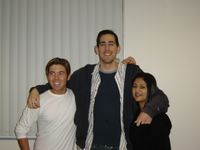 and here are a few more classmates! jeff on the left, Sonia on the right (no relation to the other Sonja!) 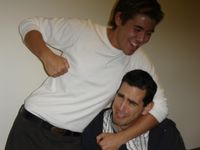 and here's jeff ragin' on me. NO reason! he just snapped! and he looks so happy about it ;(

The school year is done!

I am here at school today to put the wraps on one last essay and to study for the one final exam I have coming up on Monday, and then that's that for four months.

Last Thursday night, the journalism program miscreates along with a smattering of PR students got together at the local watering hole called Ralphs Last Resort. It was a year-end sort thing with Karaoke to boot! A good time had by all, to be sure! the photos above are from the main event... Sonja (pictured, singing her heart out) and I did a stirring rendition of Bryan Adams' Summer of '69 to kick the night off. No photographic evidence of this performance has yet surfaced. Many of our classmates were also up on stage--some by choice, others not so much (i.e., forching a few first years to perform New Kids on the Block songs...) But the drunker the crowd got, the more people were willing to sing.

I allowed myself one beer, my first one in weeks since my liver decided to crap out on me. Alex, another classmate, on the other hand, allowed himself several pitchers, and He and I headed up on stage to belt out the Righteous Brothers 'Youve Lost That Loving Feeling'... I think by the end of the song, Alex had lost pretty much all feeling, as a matter of fact, having faded away during the song for all other than during parts of the chorus. I left around 11:30 or so for the bus, having just put in two of the longest days in the better part of a month (I am sure my doctor would not be impressed) but a lot of the class moved the party over to the Foggy Dew pub.

The next morning, the lot of us were together again, this time for a meeting with the board of directors to discuss the good and bad aspects of the journalism program. The part that was quickly identified as bad was the obvious point that no one slept the night before. the guys were unshaven, girls were wearing sunglasses, many were in the same clothes they had on the night previous, bloodshot eyes were all over the place.

And as for the rest of the week, it has been much of that which was mentioned above--essays, and studying! Thanks to those who forwarded some class photos on to me in the last week, it has been great to get to know everyone over the last eight months of school, and I look forward to catching up with all y'all in the summer!

--If your doctor warns that you have to watch your drinking, find a bar with a mirror.
--John Mooney
1 comment: