Death of an Oil Tank 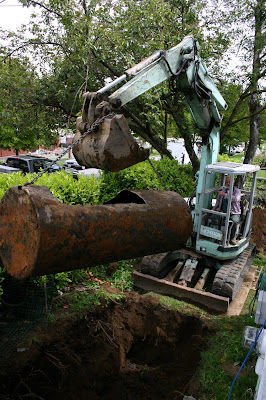 While it was an extremely exciting day for us at our house, those of you that are
A) not homeowners, or
B) homeowners that have a pristine house and property with no issues ( if so, I hate you)

Well then, you might not find this all that thrilling. BUT! If you’ve ever bought a house with a potential environmental disaster brewing underneath the property, then this series of photos is for YOU!
A recap: when Kate and I bought our house, we were aware of the underground oil tank, which is filled with diesel fuel and used to heat the house via oil furnace. What we weren’t terribly aware of, is the fact that a house with an oil tank—particularly of the underground nature—creates a huge hit on one’s house insurance, not to mention that with price of gas these days, it’s just a huge expense to keep using.

SO! We decided from day one that it would be coming out. Then we did the research on extraction of oil tanks, and read many horror stories of 50 year-old tanks that have been leaking for 47 of their years underground, thereby creating an environmental nightmare that requires tens of thousands of dollars to clean up, all at homeowner expense.


Now, we knew our tank was functioning pretty well, and by all accounts, no leaks existed. But it’s still been a bit tough to keep our fears in check while waiting to get this thing out of the ground. As you’ll recall, we converted to a gas line in past months, and since then have been gearing up to dig out the tank.

Well, yesterday was the day, and much to our relief, no Exxon Valdez-style damage existed underground! WeeHOOO! 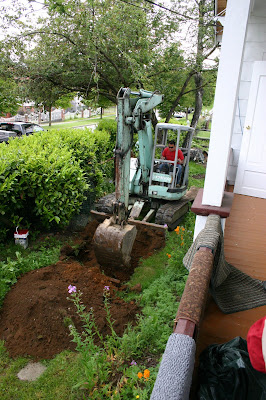 The day was also a great pleasure for our young next door neighbour, Matthew, who at the age of two-and-something years old, has a healthy obsession with “big diggers” and firemen, both of which were on scene during the day (it is the fire chief’s job to inspect tanks once extracted). As an added bonus, Matt even got to sit in the cab of the backhoe.

So, with that job done, we can now focus on the much more enjoyable task of landscaping our yard! Heck, with any luck, it’ll look less (to paraphrase the Simpsons) like a full-scale Chernobyl, and a more like a mere Three-Mile Island in no time 

until then!
No comments: