... Happy Hanukka, and a happy new year as well, of course!

Well, I hope everyone has been having a great, relaxing, safe, and joyful holiday so far! Christmas day this year was great. It started (for some...I slept in until nine) at around eight a.m. as people opened stockings, and it continued on until 10 pm.

There were lots of people around for the day--in our house for Christmas morning was me, Kate, my sister, her boyfriend Matt, Jamie's wife Dina ( Jamie had to work the day shift at the firehall), Mum and dad, and Mum's brother david, visiting from Ontario! at around 11 a.m., grandma, grandad, uncle rick, aunty bev, uncle pat, cousin dawn and husband Todd and their two boys all came over for brunchas well. we all (plus a few more) had dinner at my aunty Bev's place, by which time Jamie's shift was over, and afterwards the immediate family went back to my parents house to finish opening pressies now that Jamie was on scene. 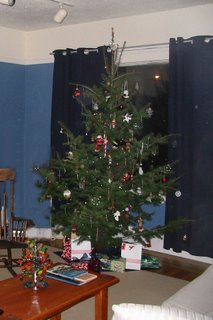 ( that's our tree in the picturwe! awww! ain't it pretty?), so there has been no shortage of gift giving / receiving in the last few days!

But now that Christmas is over, it's time to go full boar on wedding mode, the big event now just three days away!! The masses will be flying into Vancouver for the next few days--since the Pineapple Express has been blowing in from the Pacific Ocean for the last while, we certainly don't have to worry about snow holding people up, thank goodness. Sometimes 12 degrees and raining in December can be a good thing!

Okay, that's enough for now! By the next time I do a blog update, it'll be the New year, and I'll be a married man!!!! Looking forward to seeing those of you that are coming to the wedding, and as for the rest, hope to see you in the new year.

Here's to you and yours over the remaining holday season! Hopefully no one has to work too much, and you have time for a few cups of cheer!
No comments: