The man in the park

Kate walked by the park under the cover of the morning dark with the dog and didn’t see the man. He either wasn’t seen in the dark, or wasn’t there yet. Either way, by the time the kids were heading to school, the body was gone.

In summer, the tall cedars at the park--just up the street from our house--shade the play area from heat, and golden light filters through the trees as kids run around. It’s a popular spot for young families. Throughout the year, neighbours gather in the mornings to practice tai chi and old men sit at the picnic table, smoking (despite bylaws, but this is not a story about the rules), and playing hand after hand of cards.

In winter, though, the playground is mostly gloomy and silent. Vancouver’s weather does that, of course. The equipment is old and weathered, the trees bring a shroud over the whole plot, and on most days families find elsewhere to play.

I’m not sure if the man in the park was drawn to this wintry gloom, or if he somehow saw it as a solitary place, or if he did it as big ‘fuck you, world, you’ll notice me now.”

I’m not sure if he had any clue about the impact he would have, or perhaps he had a very precise idea. But a few days ago, when that man hanged himself from the playground equipment in our little park, it no longer became his concern, and I guess he was fine with that either way.

Unfortunately for our friend across the street from the park who saw him hanging there, it became their concern. When Kate saw the police car whizzing by our house at top speed as she readied the kids for school, it became her concern. And the concern of all those others around the park when the police showed up. It has all weighed fairly heavily on my mind.

“By the time I took the kids to school, [the police] had dealt with it,” said Kate, “but can you imagine if they hadn’t? With all those kids heading past the park on the way to school?”

I am sure it was bad enough for our friend to have witnessed it, they themselves being a gentle soul who will be deeply affected by this. I saw our friend the next morning while I myself walked the dog in the dark and drizzle. I have never seen them outside their house that early, so I can perhaps immediately presume that they are not sleeping well.  But the collateral damage could have been much worse if gaggles of kids had walked by the park and seen that man hanging from their playground equipment. So many more conversations with parents, questions, concerns, fears [editors note: conversations are not a bad thing, though!].

I told my office colleagues about it, just as Kate had told me (as one does in scenarios like these. It seems to help to talk about it). Even in a third degree of separation from the actual events, my colleague, later in the day, said “I am haunted by what you told us.”

There can be no winners in a story like this. Its central player, a tortured soul who chose to snuff out their own life. And all around him, a community of witnesses, either by sight or by word of mouth, who are moved or disturbed by the event. And nothing to be fixed by any of it. The man got what he wanted, I suppose, but whether the effects of it were desired or not, we’ll never know. If only he had gotten better help in his life. 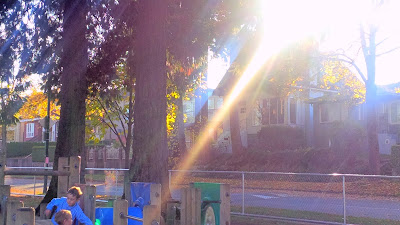 I don’t have any real conclusion to this. I’m sorry a man chose to end it all, and I’m sorry for all the underlying causes that led him to this decision. I’m sorry our friend was witness to his sign-off, though I’m glad more people--more kids, especially--didn’t see it. And I’m also sorry that I’m not sure I’ll ever look at our little playground the same again, with or without dappled sunlight and laughing children.