Man's best friend: To The Edge and Back

If you go down in the woods today, you’re in for quite a surprise…
In the Crown land that stretches out North behind my parent’s house in Kamloops, you expect a certain number of sights. Bears are not uncommon. Pine Beetle infested trees, you can see them everywhere. The tree line gives way to a relatively flat mesa, where views are in plentiful supply. Coyotes are another plain sight in these parts.

...But until this past weekend, I had never seen flying dogs...

We as a family were carrying out one of Dad’s last wishes—that his ashes be placed in the ground out near the edge of the bluffs on top of the mesa. At their edges, they drop dramatically, going vertical for hundreds of feet towards the river valley, where the North Thompson River plies its way through town.

The views are spectacular, the location is peaceful, and dad made a good choice on where he wanted to be put. 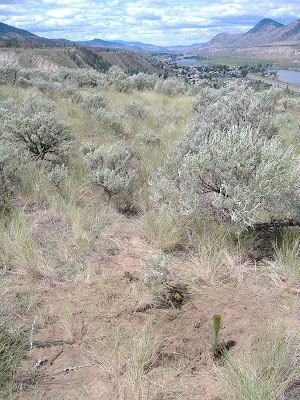 And so, on Sunday afternoon, the family marched down through the woods and out towards the grassy bluffs. There were six adults, one baby, two family pooches, dad’s ashes, a shovel, a baby tree, Dixie cups, and a bottle of champagne. The idea was to plant the tree over dad, then drink a toast.

We were all wending our way west along a path which runs parallel to the bluffs, a few hundred feet away from the edge. The dogs were happily bounding around, we were all chatting, and baby Aria was bouncing along in her snuggly carrier.

It was mainly a clear day. Warm, with a strong breeze whipping its way over the grasses. Off to the North of us, a crow rose off the ground and began flying Eastward. Immediately, Lucy, my mum’s dog, zeroed in on it. Lucy is well known for chasing birds in flight, as futile a pursuit as it is. And Nellie, our dog, is known for chasing dogs that are chasing other things. It’s an amusing spectacle to watch,and one we’ve all seen before.

But then, the crow veered to the North, out past the edges of the bluffs... and the dogs just kept on following.

In a split few seconds of stunned silence, we watched as not one, but two dogs went *Ploop, Ploop* over the edge of the horizon. We stood dumbfounded, waiting for them to reappear back atop the bluffs.

But then, how could they? We just watched them run off the edge, all Wylie E. Coyote style. And as we know from those cartoons, Wylie looks down, holds up a sign that reads EEP!, then plummets to the valley floor far below.

Let me tell you, in real life, there are no momentary levitations, and certainly no tiny signs of distress being held up in the air. I am sure that in their tiny dog brains, however, the EEP! was at the forefront of their thoughts.

No one else was in much of a position to run at that point. In our party, there were various states of injury, arthritic joints, or just arms full of babies or other stuff.

I had a backpack on, which I promptly slipped off then sprinted to the edge.

In the 30 seconds that had likely elapsed between watching these lemmings…err.. beloved family pets… hurl themselves off the edge after the crow (which, by the way if you can believe it, can fly), and my getting to the edge, the dogs had managed—either by sprint or by stumble—to get themselves a fair 90 per cent of the way down these hundreds of feet of steep, steep bluff face. It took me a second to spot them, but when I did, they were thankfully moving.

Nellie was already trying to scramble back up, but then realized her partner in crime was not as well off as she, and she wouldn’t come up the side any further until Lucy had caught up (gawd, she’s such a hero).

I signalled back to everyone that they appeared to be okay, by which time the rest of
the group was picking their way over to the edge anyway.

Eventually, Nellie made it back up, having coaxed Lucy most of the way. But Lucy didn’t want to finish the trek, despite being maybe 30 feet from the top. Stepping gingerly and clinging to the wiry grasses to hold myself on to the steep face, I slid down until I could see the pooch, who had lain down in surrender, a bloodied tongue lolling out the side of her mouth.

She was convinced to get the rest of the way up, and I then hauled myself back up over the top.

This is getting long, so I’m going to gloss over the main reason we were down there. I will say that it was a significant time for all of us, an important time, and luckily, K9 stupidity didn’t put a damper on the plans. Kari did manage to spill a bit of dad on her shoe, but then, we couldn’t have expected the moment to be perfect. That’s not how this family operates. 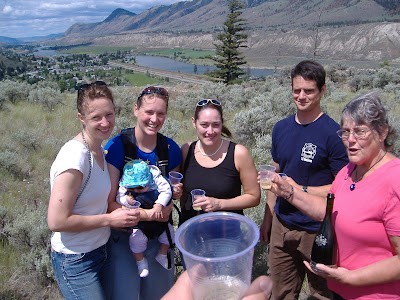 By the time we were ready to hike out again, it was apparent that Lucy’s front Left paw was hurt. Lucy is a weeny, for the record, so it was tough to tell if she was genuinely hurt, or just shocked about the whole thing. Either way, she wasn’t walking out, despite having three perfectly good legs.

Jamie and I took turns carrying the pained puppy over our shoulder. I think Jamie did the bulk of the hauling, I am happy to admit. He is a firefighter after all. Observe his fine over-the-shoulder-technique in the following photos: 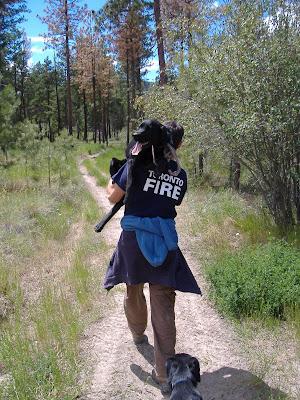 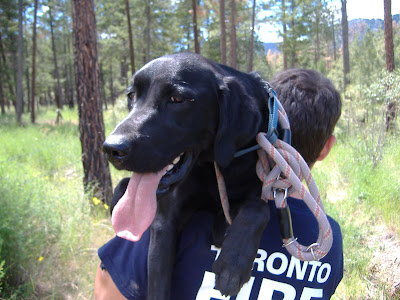 Nellie shows no adverse signs from her vertical thrill ride, and is currently entertaining offers to join the X-games tour, with exclusive marketing rights being negotiated with Outward Hound doggie gear. 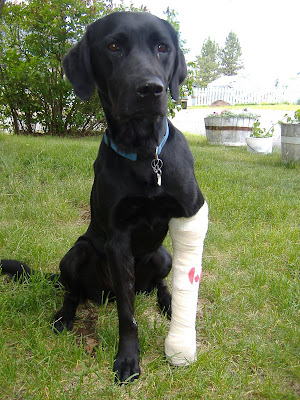 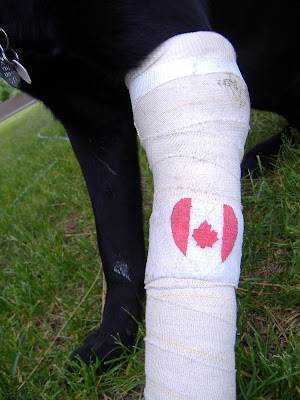 we are all vaguely amused that it was this time last year that Kari suffered a similar spiral fracture to her left leg, and that the dog is currently on the same type of pain killer patch that my dad was on during his final days in hospital.

We suspect the crow has spread the story of the two moronic mongrels it lead off a cliff to the broader crow community.

Overall, we're quite sure that dad wouldn't have seen it done any other way, and is amused by the events of the day, wherever he may be watching from.
2 comments: