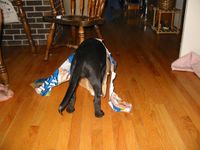 Lucy the puppy! she belongs to my parents. clearly she enjoys getting into stuff. her dog food bag for one... 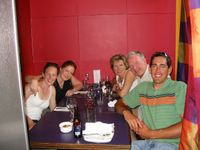 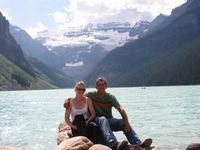 kate and stu at lake louise!

the good news, and the bad news...

so, since I haven't done a blog udpate in... oh, say... over a month now, I won't bother you all with an epic tale, so I'll try to keep it to the basics. some of the past month has been good, some of it bad, so we'lll just stick to that theme, shall we??

The good news is, I has some time off attached to the august long weekend--along with Kate--to go visit her family at their cabin on Lac Anne in the Laurentians in Quebec. It was four days of fun in the sun. Swimming, water skiing, eating, lounging, etc.

On the way home, we were flying WestJet from Montreal to T.O., then on to Vancouver. Unfortunately, we got stuck in Toronto for an extra couple of hours, and we were already on a bit of a late flight.

To make up for that, Westjet gave us $10.00 meal vouchers at the airport that night, so we got to eat while we waited.

But not to worry, it was only a four day work week, and then we flew off to Calgary early early saturday morning (August 6th) to visit some of Kate's family on her Dad's side, as well as tour in the Rockies a little bit, a la Banff and Lake Louise.

Due to some mix-ups, general delays, and lack of ability in coordinating family affairs, there was really no visit with the bulk of the family until later in the day on Sunday, and Kate and I had to fly out of Calgary early early on Monday morning so we could go to work that day, so the party ended early.

The next week seemed to go pretty quickly, though.Kate's sister georgia had come back with us to Vancouver to spend some time at our house, so that was fun. During the same period, Westjet sent both Kate and I $264.00 each in credit, for the 2-hour delay we "endured" in Toronto

But during the same week, my dad had to have surgery to remove a section of his colon in which it was discovered a cancerous tumour was growing. Back at our house, George the cat had AGAIN gone off missing ( see blog entries frmo june / July)

Hey, that's really bad. (the cancer part, that is. the cat was just disappointing)

Luckily, as reported through my mother, the surgery went well, and dad was already on speedy recovery.

Unfortunately, by Saturday morning Kate, Georgia and I were on the road headed for Kamloops, as word was given to my dad and mum that in fact dad's cancer was not dealt with, and it was also found in his liver, as well as in other places.

That, also, is really bad.

Kate and I dropped off Georgia in Merritt, and she took the Greyhound from there back to her parent's house in Kelowna. Being in Kamloops was a good surprise to dad, who didn't expect us, and it was important to be around my family just then.

it would seem putting georgia on a bus wasn't our best plan, though, as her bus crashed in Kelowna.

Nothing serious, luckily, just a fender bender, but until we got all the details, a bit disconcerting. Meanwhile, My sister and her Boyfriend flew in from England, also to be back with the family. Those Westjet flight credits helped out in getting Kari home, too.

as the week continued up in Kamloops, we called back to our Vancouver house to see if our roommate, Robbie, had seen anything of Goerge the cat. No dice. And to add to the pot, our garage got broken into and robbed of some items.

thankfully, while we were at home, dad got out of the hospital and is recovering well from his initial surgery. He's pretty thin at the moment, but spirits and appetite are doing well.

that pretty much brings me up to right now. Work for the rest of the summmer consists of 12 hours shifts instead of the usual eight hours, but that's okay, there's a day off here and there. there is another trip back to Kamloops this weekend coming to attend a wedding, and of course to see how dad is doing (as well as mum...). I've signed up for my courses this Fall, and school is back underway in two weeks. who knows where the summer has gone!

Oh, and in case the pics abouve aren't self-explanatory enough, they're from the calgary weekend, with exception of the dog's ass, which belongs to a very cute puppy named lucy that my parents are now the proud owners of!

ta for now! I leave you today with a quote from one of my faves! just sort of speaks to today's theme, as despite the number and weight of some of the "hey, that's bad" comments above, I'm still smilin! :)


"Don't waste yourself in rejection, nor bark against the bad, but chant the beauty of the good."
--Ralph Waldo Emerson
No comments: