the work site! a similar photo appeared in one of vancouvers new dailies, 24 hours... If they were willing to print a picture of me, it musta been a slow 24 hours, I guess!!

Email ThisBlogThis!Share to TwitterShare to FacebookShare to Pinterest
Labels: work

Hey folks, sorry about the break. It's been a hectic few weeks! I am now on my summer job--this entails standing in front of the Vancouver Convention Center Expansion Project in a hardhat (see above) and quenching the intellectual desires put forth by the thirsty minds of the public. It's been good so far, and my tan is kicking ass ;0)

three of us were hired for the job--we spent a week talking to various stakeholders to get their perspective on the project and find out about their involvement. It left us with a deep well of knowledge about the project. So, for the rest of the summer, the three of us will cruise the sidewalks, letting the public pump our brains dry of it's information!

After work, I generally go to the gym, then get home with time enough to eat dinner, watch some TV and go to bed. Today, however, I skipped the gym and came home to work on the garden. This, along with Kate, has become a rather geriatric-type of hobby around the property (well, it would be with Kate perhaps, but she is on practicum in Victoria for eight weeks). Despite the unfortunate association between gardening and old age, lemee ask you this: who's gonna get to eat veggies out of their ground, instead of paying for them? Hmm? who is it? Hmm you? no, of course it's not you. that's right, it's me ;)

in other news, it's been quite the week of life and death round these parts. Kate's grandmother died, as did the father of a family friend of ours. Kate's dad was also in the hopsital getting his arteries cleared of a 99% blockage, and another friend of Kate's whom is working in the States is quite ill and is stuck in hospital. On my side of the family, my 16-year-old cousin has had some tests done on his heart after suffering a few bouts of heart-attack-like symptoms.

so really, that's the bulk of it. work, gym, gardening, work, gym, gardening. Oh, this past saturday I had opportunity to attend a celebration of the career of Kamini Jain, a friend that is on the national canoe and Kayak team--it was a great chance not only to see kamini get some deserved recognition for her hard work, but also to catch up with padlers that I haven't seen since before moving to edmonton!

This weekend coming up will be spent in Seattle! I hear it's supposed to rain a whole crapload, but that's okay. I haven't been out of town in ages, with exception of going to Kamloops at easter, so this should be fun!

Last, but not least, I leave you with just two of seven photos that my best friend Doug has sent on in the last week. Last year, he decided to do seven haircuts in seven days in support of the easter seals camp he works for. this year, he has repeated his performance! this is just a peak of some of the hair. If you want any more of the seven, just email me, I'll be happy to send on the lot of them!

ta for now! looking forward to a week of no more deaths or illnesses, thank you very much!

Life is just one damned thing after another.

Email ThisBlogThis!Share to TwitterShare to FacebookShare to Pinterest
Labels: work 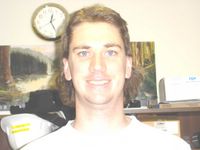 This is doug in all his mullet madness hotness. Not. 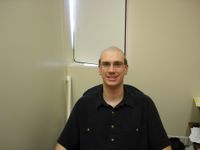 Okay, THIS is doug in all his hotness! glad this is for a good cause Doug. Otherwise, everyone would laugh at you. More than usual, I mean.