Three is my favourite number.

Where possible, I always adopted it as a jersey number for various sports teams over the years. A triangle is my favourite shape. The Holy Trinity. Three cheese pizza. Three’s company. Once, twice, three times a lady. Three blind mice

Never mind, the point is this: Good things come in threes, isn’t that what they say? I presume, then, that the fact I’m turning 33 is a VERY good thing. Two three’s sitting right there next to each other? BAM! Bring on advancing age, I say.

I've just come away from a great home cooked dinner with friends and family, all on the heels of a satisfying day at work. It all makes a guy pretty thankful for where he's at (editors note, third small child in photo below belongs to one of said friends. we haven't recently spawned a random third child...).

Things don't generally stay the same for long, though, and as much as I like how things are, I suspect—check that, I know—33 will be a year of much change. Our house is about to start getting torn apart for a big reno in a few weeks, so we’re moving into a rental space for a while as we get the work done (living in five months of construction zone with two small children + dog just to save money = totally false economy!) . So in mere days we’re moving the whole house out so work can begin, only to move the whole house back again in five months or so when the work is done! 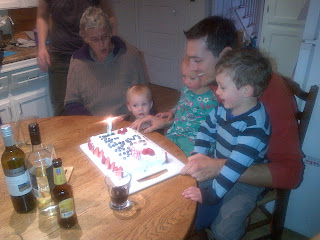 At some point in the next year, I’ll need to change jobs again—I am only in a maternity leave coverage role right now, and as much as I love what I’m doing, I have to give the job back to someone else!

My son is in preschool now, but come September. 2013, he’ll be a kindergarten kid. As well, our daughter will be old enough to start some preschool after her third birthday, so these two things in combination will be a big change to the flow of the household movements.

There is one more change coming--doesn't feel so good--that at best we can only slow down, but not stop, much as we might want to. Facing up to the reality of mum’s situation has been tough this past year, and it will only get tougher. If there’s something from the past year that doesn’t need to change, it’s the steady stream of positive thoughts, prayers and white light that everyone has sent out in mum’s direction. It has worked well so far, no need to change anything in that department.

Long story short, good or bad, here is to change. 32 came in like a lion but (generally) went out like a big fluffy lamb. Here’s to more 'baaaaa' in year 33!