Today, I remember an old friend (to be read in slow, eulogizing style). 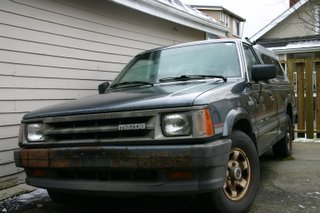 And so, with an exchange of $2,000, it was less a transaction than the start of a relationship. A love-hate relationship, that is.

If I had unlimited funds, I admit, I'd love to get you running again, but I don't have the resources, or the lack of sense to pump any more cash into that lemon. But seriously, I love ya, Gipper.

over the last few years, The Gipper has received a few costly transplants and upgrades. Most notably, a replaced transmission, the usual brake work and oil changes, a new bumper when some jackass rearended me. It cost a lot, but all is fogiven when I think of the good times on the open road, camping in the back of you, or the way the wind would roar through the cab when a kayak was tied to your roof.

I chose to ignore the shocks problem, and I basically learned to drive a standard with you, so the clutch had to be replaced somewhere in the course of our relationship. But our love can never be replaced. 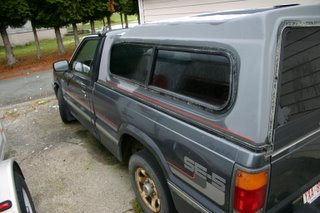 You'd take half an hour to warm up properly, the Chernobyl-sized curl of black smoke finally reducing to a mere Three-Mile Island cloud of grey. But radiate in my heart you always will.

remember the time someone broke into you while parked outside the house on a cool spring night in Edmonton? Your locks were never the same, and the thief got 65 cents in loose change and a pack of gum--they could never take your soul though.
Never.

Oil still to this day leaks into the fuel line, and the battery is so weak from my monthly habit of leaving the headlights on (thanks to all of you over the years that helped me jump start the truck) that now, a jump start is the only way to get you going.
Yes,you had your foibles, as do we all. You were always good on gas though. >sniff<

But now, it's time to part ways. You've got a future ahead of you as a Kidney car, Gipper, and you're gonna do good things. The money the BC kidney foundation will get for your resale will go towards their programs. And, if they can't sell you (c'mon, who wouldn't want you), they'll strip you down and sell your parts--memories and
all--and you'll probably bring in even more money for the BC kidney Foundation than if you get sold as a whole vehicle.

And me, I'll be left with a $60 dollar tax receipt and the remembrance of our time together. The rubber ducky with the sunglasses has been taken off the rear view mirror, 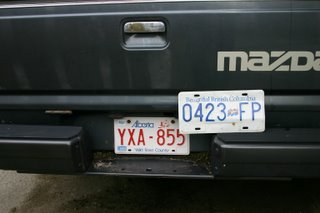 the dancing hula girl has been pried off her sticky pedestal on the dash, and the CD car kit ejected from your old school radio / tape player one last time.

You were a piece of shit, Gipper.
But you were my piece of shit, and I loved ya.
When the Kidney foundation tows you away this coming Tuesday morning, I know what I'll be thinking.

They say that you never forget your first one.
You haven't even left the car port yet, but you know what?

I already know that they're right.
No comments: