Still jobless (and other summer stories)

The job search has proved itself an interesting one as of late, garnering me one interview for a handful of applications, and for said interview, I didn't get the job. No matter, it would have meant two and a half months on the road, and I'd rather be at home, I think! (this is what I tell myself to make it all seem okay... >sniff<) But honestly, I am not worried about the job prospects. Of the four other application packages I have 'out there'none of them have even reached their closing dates as of yet. The summer is generally a pretty slow season for the Communications world, as it is for pretty much anywhere one might try to get a job. So, as the Fall draws closer, hopefully prospects will improve!

despite my lack of employment, I still found time in my busy schedule of job searching, housecleaning, going to the gym, and whipping our puppy into shape to head up to Whistler for a few days over the August long weekend. Kate has Fridays off right now, so we even got a four day trip out of it.

The highlight of the weekend--aside from the glorious weather,mountain vistas, shimmering lakes and fresh air--had to be the Canadian Barbeque Championships, which took place in Whistler village over the course of the weekend. Picture it if you will:

two dozen or so competitors gather to cook up their best BBQ'ed Pork, Chicken , and Beef. You, as a spectator / carnivore head to the site. upon paying five dollars which goes towards the charitable cause of crohns disease / colitis research, you're given free access to wander up to any of the competitors tents, and sample of the particular meat they happen to be cooking for the competition of the hour.

First up, the Pork. Forgive me Jewish God, for I have sinned. There was more pulled pork in a plethora of mouth-watering marinades than this here meat eater knew what to do with. More glorioualy succulent ribs on hand than even the most gluttonous of gluttons could hope to gorge upon. There's a little bit of Homer Simpson in all of us, I think. And on August sixth, there was a lot Homer showing up in a lot of people.

After the pork had been turned in for judging, the competitors turn to their chicken recipes, and the process began again, with the carnivores running around like chickens with their heads cut off (pun intended) trying to grab up the samples before they're all gone. And so it went with the beef after the chicken had been turned in.

Yes, my meat-eating friends (sorry to all the Vegetarians out there...)It was every bit as wonderful as I describe, and then some. I imagine it will be right up there with wedding days, and--when they arrive--the birth of my children. Unlike such events, however, the BBQ champs happen every year. Amen.

as pennance for the extreme over-indulgance, Kate and I used up the free lift tickets we had and hiked atop whistler mountain for a few hours the next day, so as to work of some of the meat in the high alpine. Okay, okay, it wasn't really punishment, as the pics below will attest to!

atop Whistler mountain, with a view to Black Tusk in the background 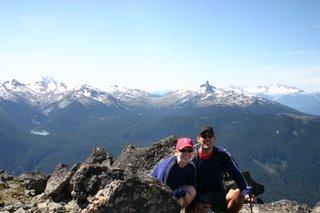 an inukshuk garden, top of Whistler 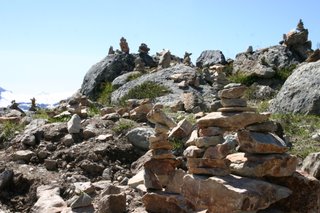 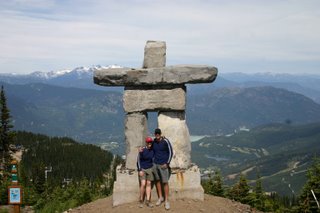 flowers in the alpine 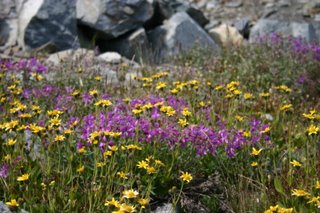 a wall of snow towers above Kate 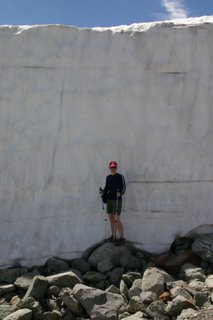 Oh, and if any of you are wondering about the status of the puppy, she's generally been great, though thus far she's chewed through several BBQ tools off our back deck, two DVD cases, a corn husk broom (twice... it was reconstructed, then chewed again)two ant poison traps, a mini football, a leash (an escape technique), and has jumped two fences and leapt from a first story window in order to track us down. Here's a few more pics! 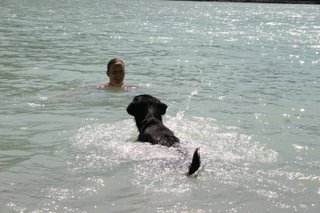 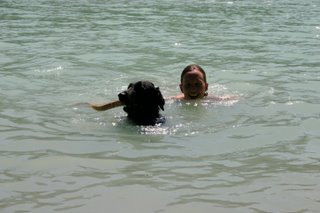 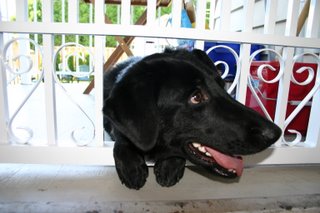 Scratch my tummy damn you! scratch it! 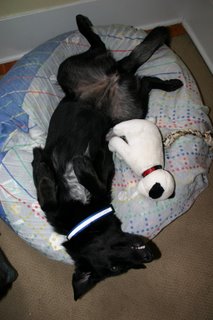 until next time, I wish you puppy-tongued kisses and 14 hour slow-roasted pulled pork. Cheers!
No comments: