Francois Lamontaigne. Age 52. Not very tall, maybe 5'7" or 5'8" at the most. Grey hair, pulled back into a small pony tail. And a beard, pretty neatly trimmed and peppered with the colour of his younger years. He speaks with a thick French-Canadian accent, having grown up in Montreal. He's also Bi-Polar. And homeless. well, he was homeless, until he found Kate and I. Actually, he's homeless again, as of today. Perhaps I should start at the beginning...

... Francois first came to us through our church. Mid December, Christmas season fast approaching. Kate and I were in a Sunday morning meeting with our Social actions committee, just before the service started. Gary, our minister, poked his head in the door and said good morning, adding that he had something he just wanted to put in our ears.

"There's this homeless fellow who's come in the last few weeks," He said, "he's got his government cheque for $325 a month, and he's looking for space if any one has it. He's here again this week, and still asking around."

Gary said he had told the fellow that the chance was slim, but that he'd ask around. Once Gary had made his announcement, Kate and I turned to one another. We had a basement suite in our new house. not yet rented, but then, in no shape to be rented yet. And yet, better than the streets, surely.

To make a long story short--we talked to Gary, we talked to Francois, and it seemed like a good fit. Bi-Polar yes, but level, and medicated. He just knows he can't be on the street, and needs a quiet warm place to sleep and eat.

And so it was. Francois moved in right away, despite the state of the suite, and you've never seen anyone so happy, so thankful. After all, it had to be better than dirty, back-alley concrete. He was happy to be out and about during the daytime, and I fixed up the space while he was gone. New paint, new trims, new flooring, furniture. In no time, we had a gleaming suite, and a tenant who was happier and more grateful by the day. He told us he was never leaving, and that our place must be the Hyatt.

Francois was the perfect fit as a tenant. A guy who just wants quiet space, who keeps to himself, who respects our property, is happy to play with our dog, and who even joins in our yard work with us. Sure, he talks a lot to us when he's around us--but a guy who has lived on and off the streets for 20 years has a lot of stories, and probably not many people to listen to them.

This happy arrangement all came together just in time. The snow, the windstorms, the frigid rains. we had helped bring someone out of that. When there is so much talk about the homelessness crisis in Vancouver, we were doing something about it.

Just last week, though. Last week was all different. Something went wrong. Not with us. Not inside the house. But inside his head, something went wrong. The place of warmth and shelter was all of a sudden a prison. we were either working with the police, or with a gang. Either way, we were watching him. And poisoning him, through our furnace. Nothing we said could convince him this was a safe place. No question he asked could we answer correctly. Kate especially could do no right in his eyes.

Francois' Bi-Polar had bubbled to the surface. Boiled, more like it. And it wasn't pretty. Lots of anger and storming off. He's lost his grip on reality, and we can do nothing to influence him positively.

Fast forward again, to today. Francois has reappeared today, after being off the property for a few days. Reappears with bloodied cotton swabs taped to his wrists. He's been in the hospital again he says, calmly. We gave him a heart attack, he says, again calmly. He had to be in the hospital. With IV's hooked into his hands and all that.

He seems more level today, but there's an edge there that I don't intend to push. He's still not back to normal, I can tell. I let him talk. He's got to go, he says. Can't stay here. It's not us, it's this place. He apologizes for the things he said to us, said to Kate. I hang around in the suite while he packs, which isn't packing at all. I've gien him my old travel bag, but he just moves things from one couch to the other while he talks. Changes his socks three times, his shirt, four times. Finally, he gets some things in the bag. not much, though. In the end, he leaves the bag in the suite with everything else, deciding it's too much weight to strain against his heart. I listen to his frustration. About the system, about 20 years of disappointments, of being let down.

"The people, they're always nice--well, usually, like you guys," he says. "But they don't know what it's like for me. If everyone could be me for just one day, they would see how hard it is. But they just don't know."

and with that, he left. He says he'll go to the church tomorrow to talk with Gary, to see if he has anymore help for him. And he'll come back for his stuff tomorrow, too, or I might take it to the church, and he can get it there.

Maybe he will be back tomorrow. maybe not. maybe he'll visit Gary. maybe not.
We tried to give a man a home, and, during the coldest, wettest, windiest, ugliest period of weather in Vancouver's history, we did.

We tried hard to keep him off the street. A Government issue, $325 a month cheque doesn't by happiness. If it gets you a place in this overpriced town at all, it just hides the problem away for six weeks, until there is a need for more than shelter. Like a qualified mental care team, and 24 hour assistance.

These things were not well enough in place, and today we are left with frustration, a feeling of helplessness, and an empty suite. 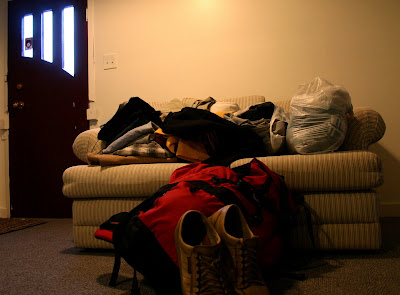