back on the employment wagon

Let's play Good news/ Bad news once again, shall we? It's been a year
since I did that, after all!

Since last I wrote, I managed to fool someone into thinking I'll be an asset to their organization :)
I'm going back to work! hurray! I'll be going to what was called the Workers' Compensation Board and is now called WorkSafeBC. I worked there doing public affairs / media relations / kid-who-cut-his fingers-off spokesperson work back in 2001/2002, and I'm quite pleased to be going back! This time, I'm going to be helping with some marketing initiatives in the Investigations Division. What do they do? I won't fill in all the details here, but if you feel so inclined, follow this link to an FAQ on the department! the general idea is that they look into the serious accidents or deaths resulting from an incident on a jobsite.
So, I'll be starting that gig on Sept 6th on a six month contract to start--sounds like there's good chance for extension / integration as a permanent worker. It's a junior management level job, and I think my official title will be 'Junior Policy Analyst'. Don't ask me why!

Unfortunately, it may be the case that the dog training gets cut a bit short because of starting a job, and we could use more time to get her used to our being out of the house--not that I haven't been trying to desensitize her as days have gone by! submitted as evidence of her need of help:

Exhibit A: the TV room as it should look... 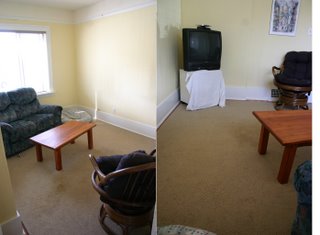 Hey, that's good!
Exhibit B: the TV room as it looked after three hours of nellie being on her own in there... 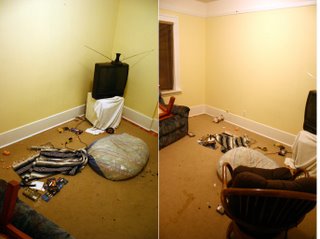 Hey, that's bad... (note the pee stains...click the pic to enlarge if you really want to! )

with other more good news, dad had a CAT scan done recently, and his last round of chemo has gone really, REALLY well--his tumours have shrunk 80 per cent! We are all thrilled for him, and it's nice to know that his being under the weather during treatment days has at least been worth something!

Also in the cancer camp, less fortunately, is Kate's childhood neighbour, Gord, who has a fast acting Lymphoma wearing him down at the moment. He's a father figure in Kate's life, and in general more a member of the family than a neighbour. Just keep him in your prayers for us!

But the Good news goes on! just look at these pictures! the garden is putting out a great crop right now. tomoatoes of the cherry, beefsteak and roma varieties, and HUGE runner beans by the fistfull, with bell, Jalapeno, and banana peppers still to come

also, my sister-in-law came back from a trip to Holland and got us all sorts of goodies, and in just a few days, my sister comes home to live in Canada for a full year, after living in England for the past three years as a teacher. It's going to be great to have her around for a while!

And has anyone been paying attention to the weather around here lately? Holy dinah! faaaantastic!

It sure is! and on that note, since the Goods are winning over the Bads at this point, I'll wrap up and just say that overall, life is pretty frickin' sweet.

... Looked up to the Lord above and said "hey man thanks,
Some times I feel so good I gotta scream"...---Tragically Hip, New Orleans is Sinking
No comments: