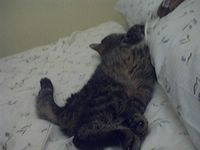 Hi, remember me? I'm George, the cat that was gonna run away. clearly, as indicated by my blissful sprawl across the spare room bed, I have reneged on my intentions to leave. Meow.

Okay, I can roll over and die a happy man now

..I'll get to the gushy gushy stuff that relates to my blog title first so that it will not be dragged out or dwelled upon for too long, so that any of you out there reading this will not be subject to this any longer than need be :)

SO, last night I FINALLY had the chance to see, live and in concert, the wonderful and incomprable Ms. Sarah Mclachlan! wooHOOOO! For any of you that aren't aware, I am a stomach-turningly large fan of her music, her personality, her hair...etc. I have like, 12 of her CD's, I'm in the fan club... okay, 'nuff said.

short of seeing her perform a few songs as part of a tsunami benefit concert a while back, I have never seen her live, so this was HUGE for me! It was especially kewl that she played here in Vancouver. It was the last show of her Afterglow tour, which has been going on for the better part of two years. The show was a long time coming--having purchased tix for a kelowna show a while back, Sarah got sick and couldn't perform. I thought that would be the last chance to see her before she went into retirement... fast forward once again, Kate and I hit the town last night to take in the show, and it was GREAT!! Life is good! OKay, I said I wouldn't dwell on it, which I already have, so it's time to move on!

*You can see from the photo above that George the cat has happily moved back into this house. there's your update on the cat*

the only catch is that there will be, if all goes according to plan, up to seven people lving in the basement--four adults, three kids (no, we won't be running a sweatshop...)we've met them and they seem great, so we'll see in the coming days if all shall come to pass! seems like a nice thing to do to help some people get started here in Canada! I shall keep you posted! feel free to blogpost / email me with your opinions!)