'Free of the children', or 'Ottawa, I hardly knew ye'

Disclaimer: I love my children. At the end of a hard work day, coming home to them erases the blahs. The funny, adorable things the kids think to say or do for no apparent reason at any given moment is a reminder that there is innocence and discovery and joy in the world. Nothing is quite so satisfying as tussling my sons hair or giving my daughter a peck on the cheek.

That being said: By God it’s good to ditch the little ankle biters for a weekend away.

Kate and I had the chance to do just that this past weekend. Not a normal occurrence for us, by any stretch. In fact, since Heidi was born 17 months ago, this is only the 2nd time we’ve both left the kids at once, and the first time we’ve A) left them for more than one night and B) been so far away from them, as we flew half way across the country to the nation’s capital, Ottawa. 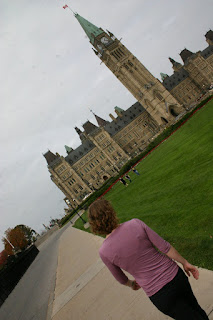 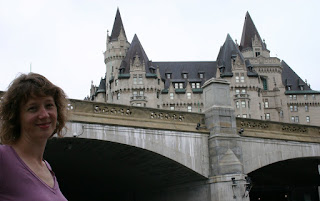 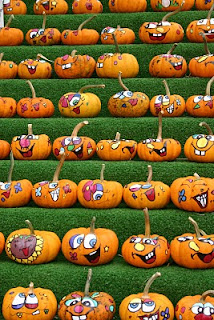 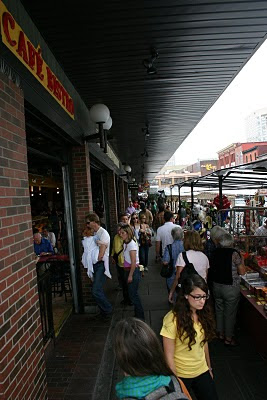 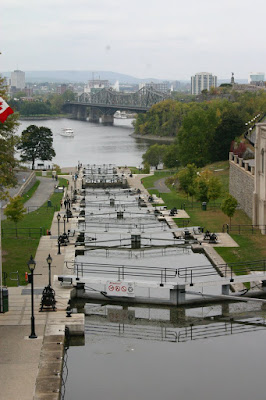 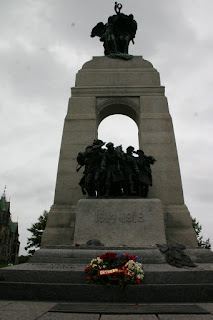 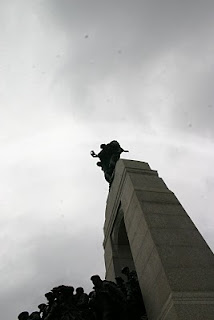 We managed to see the canal, the locks, the river, Parliament Hill, the war memorial / tomb of the unknown soldier, the Byway market (re market: see random images of crowded sidewalk and painted pumpkins)... and the inside of Rideau Centre shopping mall. That last one isn't all that inspiring.

Perhaps it was the main event, the reason for our trip: Kate had been invited to give a toast at ‘The Sailing Dinner’, an annual event where Canada’s newest Rhodes Scholar recipients are given a warm reception by alumni of the same scholarship (ie, Kate), before being sent off into the great unknown. Though I was merely a hanger-on at such an event—Kate’s eye candy for the evening, if you will—it was an exciting evening for me.

I’m not one to be too shy about mixing freely in a room full of people, and it was a great opportunity to be mixing freely in a room jam packed with a diverse bunch of politicians, social activists, lawyers, scientists, doctors and other worldly do-gooders from current and past generations, many of them having made major marks on the the planet. So the main event was good, but maybe it was being able to go out to a club with my wife afterward and act like we didn’t have kids, socializing into the wee hours of a warm Ottawa night. Ooh, speaking of which, maybe it was the weather I liked the most—25 degrees and humid? Yes please! Back home the tomatoes I planted in May are still green, for crying out loud. So to have summer weather at the end of September? Amazing. Or maybe I liked the relaxed, brunchy get together with friends the next morning before heading for the airport to fly home again (we were actually only in Ottawa for 36 hours).

Or, maybe it was the plane ride home again, where we were once more treated to a plane with extra seats and uninterrupted movie viewing (Kate opted for a novel this time. Ever the Rhodes scholar). Actually, no, it wasn’t the ride home that was my favourite. The woman in the window seat was on a steady diet of wine, red and white. She got a little odder as the flight went on which was bad enough but my thoughts turned to ‘What if we crash? Surely she’ll be the first to ignite, thanks to her elevated blood alcohol level and I’ll be consumed into her drunken ball of flames, with no chance of survival regardless of how marginal the odds of living were already going to be… but I digress…).

Maybe my favourite part of the short but sweet weekend was actually when we got off the train back in Vancouver, where Sacha came running over in his clunky shiny blue rain boots to meet us and deliver hugs on the fly, soon to be followed by his gurgly little sister. Yes, I had cocktails with the interim leader of the Federal Liberal party. Yes, I had dinner with the head of Mount Sinai Geriatrics, international relations specialists, human rights advocates, drivers of change of important social policy, a leader in behavioural intervention for children with autism (ahem, Kate) and maybe future world leaders (In a room like that, who knows, right?) and countless other high achievers, all of it in the opulent and historical surroundings of Ottawa’s Chateaux Laurier. But maybe, just maybe, my favourite part of the weekend was once we got home, as I watched my one-year-old tip tomato-saucey macaroni noodles into her mouth off a plastic yellow IKEA dinner plate, grinning at the realization that she’d just figured out a new way to feed herself. 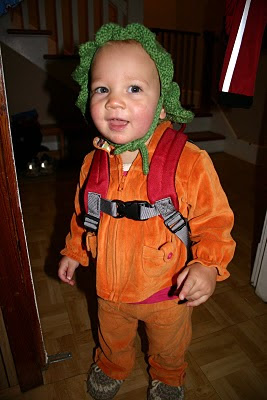 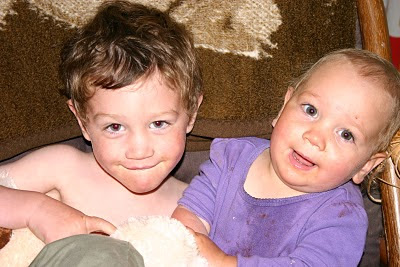