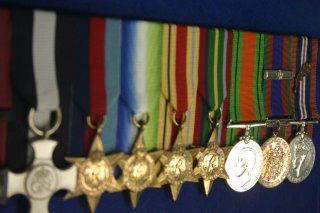 well, I've finished my military journalism course in Alberta, and there's a lot to tell, so strap yourself in. First of all, I'm a trained killer now, and I'm going to Afghanistan as an embedded JTF2 journalist within the Canadian Forces (CF). Huh? what? Oh wait, I'm just mashing together everything I learned in one sentence. I'll slow down a bit... 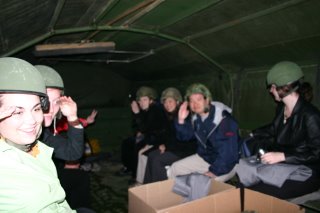 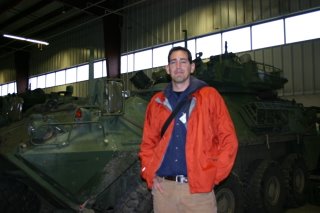 First, our trip started off at the University of Calgary. Our program coordinator and instructor, Bob Bergen, took us through a three inch thick resource binder at breakneck speed over a two day period ( by the way, 'us' refers to the 12 of 'us' from across Canada that were participating in the course). The binder has everything in it from press clippings to the FOI request processes to the Queen's Regulations that the military is subject to in their conduct, and pretty much everything in between that might be of use to a journalist attempting to report on the military. So, take a dash of classroom theory, and pepper in talks from retired service men, current public affairs officers with the CF, mix in tours to the local naval museum, and the Calgary Highlanders regiments to check out their digs / drink, and you come out with a bunch of cub journalists that have a much better idea as to how they might go about reporting on this crazy thing called war... I mean... uhhh.. peacekeeping...

We also spent a few days at CFB Edmonton to get some hands-on experience with the tools of the military trade (read: fun with guns and tanks). 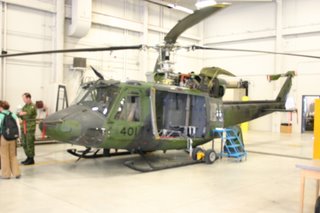 As you can see from the attached photos, we got up close and personal with everything from the small arms that are used in the field up to the vehicles currently in use by the CF. 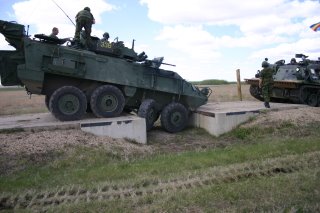 Not everything worked perfectly--Namely, the LAV (Light Armoured Vehicle) that four of us were in, in which our driver misjudged the width of the gap he was attempting. One broken axle and a 'rescue mission' later, six of us were squeezed into a TLAV (Tracked Light Armoured Vehicle). The driver didn't misjudge any widths on this cruise around the training grounds, but he did misjudge the depth of a muddy pool of standing water. 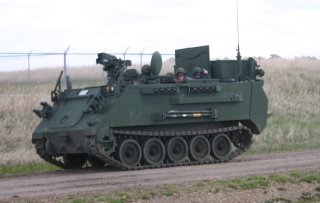 We had a wave crest over us and soak us totally, and the engine flooded as a result. Within a few moments though, the engine roared to life again, and we were on our way.

Also while on base, we were introduced to the use of some small arms in a simulator room. The photos I have didn't reproduce the video wall very well, but the idea is that a 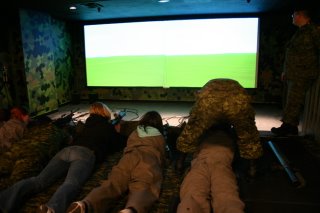 battle scenario is loaded onto the screen, and you have the choice of one of eight weapons with which to destroy the enemy (congrats again to Kurt for taking out four--count em' four--friendlies during the heat of battle. It can happen easily folks, sad but true).

The visit to Edmonton wasn't all toys--we had classroom sessions with various areas on the base, such as the 408 Air Squadron, the Princess Patricia's Candian Light Infantry, the Engineers, etc. It gave us a very holistic view of everything that goes into the functioning of a base. 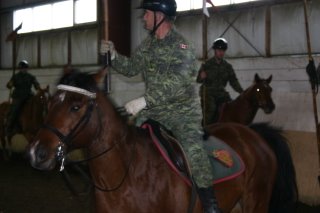 You'll also note from the photos some men on horses--we were given a demo of the Lord Strathcona's Horse (Royal Candians) Ceremonial Mounted Troop, Lead by one Lieutenant Alastair McMurachy. They take care of Prince Charles and Camilla's horses--I have pictures, but if I showed them to you, I'd have to kill you.

Oh, and while on the base, we had the opportunity to socialize with officers on secveral occasions. We had a breakfast and lunch with them, and we were allowed to join them in their mess for Friday afternoon Happy hour.

The trip afforded out-of-session fun, too! in Calgary, we were put up in the fabulous Village Park Inn, well appointed with restaurant, bar, pool, and hot tub...most rooms had fridges and microwaves, too... but never the room I was in..l don't want to talk about it. We had free time to explore the city---no trip to Calgary being complete without hitting up Peters' Drive in!! 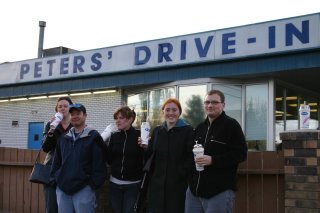 In Edmonton, we stayed at the City Centre Ramada. Ironically, the City Centre Ramada isn't actually near the city centre. go figure... In any case, while in town, we visited West Edmonton mall and Whyte Avenue. Since I moved form Edmonton in 2004, not a whole ton felt as though it has changed, other than the city keeps getting wider and wider with constant building. I had the chance to see a couple people while in town though wich was great ( suz, thanks again for the nutz and bolts!) For those of you wishing for a refresher on my opinions about Edmonton, see blog entry 13.08.04, as well as those around it.

We spent a half-day in Banff as well, which was really nice. 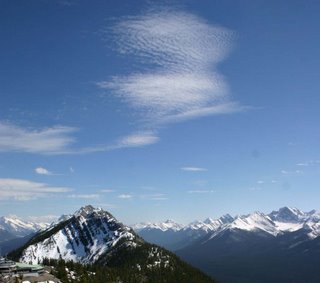 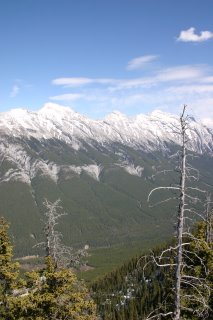 The sun was out, the clouds were few and far between and the sights were... seen...?! Hmmm, I must be out of words... so, in summary, what did I actually learn??

A journalist covering / hoping to cover the Canadian military faces some roadblocks. For one, the the military is a boys club chalk full of intimidating language, acronyms, and ceremony not necessarily understood by civilians. So even though you might think you're KBD, you better find yourself getting up at oh-dark-30 with the troops in order to work your way into their culture and earn some of their respect. talking to a PAFO won't get you the story you want / need, so cozy up to those soldiers! (Clear as mud??)

Second, once you're 'in' (read: embedded), you have to be careful not to end up with Stockholm Syndrome, being overly sypathetic to the unit you finally managed to get close to. Don't wanna lose that precious objectivity!

Third, Peacekeeping as an idea is nice, but much like communism, the theory doesn't seem to relate to successful practice! overwhelmingly in our course, we heard that soldiers are frustrated with the term. Peacekeeping might work if they were going into areas where peace existed, but generally, that's not the case. The CF is in areas of conflict, and as such, actually have to engage in war (dirty word such as it is), and with the paltry funding that the CF receives, it ain't easy being a soldier engaging in said war.

So, there's a taste of what I learned in the past 10 days! there's plenty more where that came from, and I'd be happy to chat it over with anyone who's interested (I promise I'll use less acronyms). To my J-school peeps--I highly recommend looking out for this course next year!


* medals pictured are those belonging to Lt. Hampton Gray, who was awarded the Distinguished Service Cross and the Victoria Cross; he died in Battle just days before the end of WWII, the Naval Museum is dedicated to his name.
No comments: