New Digs and other info

Well, It's been six weeks, give or take, since I updated this thing, so I'm going to try to cram as much of it as i can into one breath, so as not to waste your time in this sound-bite, give-it-to-me-now age of information...

updating you from mid october on Kate lost her wallet then I crashed the car the next day and then we bought a house two days later and then two more days later my contract at work finished up and then Kate got the flu or something gross like that and then her wallet showed up magically in the mail with everything in it so yay but even though kate now had a license again she still had no car but kate's mum gave us her truck which was good as kate needs a car for her work which is going well by the way and also cause the car wasn't fixed until just before rememberance day which means it took a month to fix the car which tells you that I smucked it really good but when we got it back we used the car to go to kamloops to visit my parents over the long weekend which was nice and mixed into all of that I have been trying to line up another contract and hopefully one that is longer than the last because that was way to short and I have also been touching up and fixing up this house before we move out of it which happens this thursday, november 30th and hopefully the snow that has been falling here the last couple of days will have disappeared or at least sorted itself out as moving day could be gross but I think the snow is maybe a bit 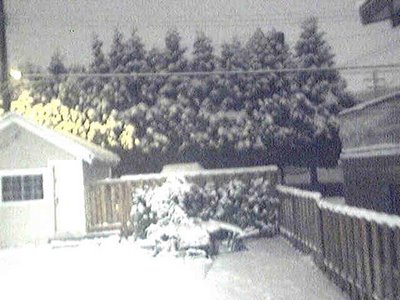 better than the 320 mm of rain we have so far received in the month of november and since it's the end of november that means I'm only three months away from being an uncle and if you were wondering Dina's baby is doing just fine and nellie the dog is also fine and mum and dad are fine they went to mexico for a week last month and that was nice and dad just finished his very last chemo this week way to go dad it has been a long year but you rule and now I think we're up to speed which is good because I'm about to pass out.


did you catch all that? highlights include:


-looking for work
-bought a new house, which is awesome, pictures to follow

so that brings you up to speed! when next I write, which will hopefully be next week, we'll be in our new place, and with any luck I'll have another gig lined up.
No comments: