That man on my lawn

The usual after-dinner routine in our house typically involves a little bit of playtime for the kids, followed by bath, toothbrushing, stories, and bed. It doesn't usually involve hosing down a distraught man who had been pepper sprayed.

The man approached our house after dinner, stumbling around, and wailing from the sidewalk that he needed help. He needed water. He'd been pepper sprayed. Our daughter went into instant hysterics. The man was invited to the side of the house where we had a hose. Kate, in the meantime, called 911 from inside the house, and worked on keeping the kids calm.

There followed a strange 20 minutes. Essentially, I stood, aiming a jet of cold water into the face of a shirtless, shoeless, bleeding, high/drunk young man. I talked with him as we stood there, to keep him as calm as I could. He called himself Paul Bear. Said two Chinese guys had pepper sprayed him. Wouldn't say why or where. He also had with him a bag of sealed, raw meat of some sort (later identified as squid). Wouldn't say why he had it or where it came from. Lots of money in his pocket, which he was now worried was getting wet (it most certainly was). His emotions swung all over the place. In one moment, he was expressing how disappointed his parents were going to be in him; how he had to stop doing this to his mom because it made her feel bad. In the next moment, he would growl aggressively and hit himself in the head. Then he'd be fearful. "Please don't call the cops, please don't tell them you know my name." (Kids, stay away from drugs, mmkay?)

Emergency services arrived. There were a few moments of chaos. A paddywagon, two unmarked cars, two cruisers, a fire truck. Police and fire crew coming in the side and front gates.

I was off the hook at that point, and became an observer to the scene. The police and fire were admirable in their behaviour. No matter the insults thrown at them, no matter the erratic behaviour. The man was placed in handcuffs, and was sat down in our yard. It was a long time before he was taken away. Paramedics couldn't get there in good time, busy with other calls. The man was eventually led into the back of the paddywagon.

It was listening to the man swing through his emotions. That was the hardest part of the whole thing, I think. He was angry at police, and then himself, and then calm, and then sobbing, and then telling the police how he loved and hated them... it just went on like that. Despite his earlier requests not to call the police, he even took time out to admonish the police for taking so long to show up! And then, a deep, woeful cry, on his knees in handcuffs, at the feet of an officer, being hosed off (at his request)... "This is SO FUCKIN' HUMILIATING!" I felt that, for him. I'm sure the officers felt it, too. But then, back to yelling about his ruined $40 t-shirt, and yelling at the police.

"The Good Samaritan, the man who lives here, he helped me for like, 20 minutes, and WHERE were YOU guys, huh?!" 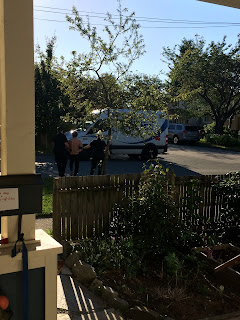 After he had been taken away, the kids were invited outside. They were the ones truly freaked out by this, our daughter in particular. Stickers from police and fire were handed out. Friendly chats with officers about what kind of animal a squid is. Pictures in front of the police cruiser (Sacha got to wear a tactical vest over his housecoat and PJ's). Encouraging words and 'thank you's' for all involved

It wasn't over for us, of course, once the police left. It was bedtime, and there were questions. Why did the man have sore eyes? Why did someone do that to him? What did he do to himself? Why did he do it to himself?

There was lots of discussion of the choices we make, of problems we don't know about, of helping without judgement, of lending a helping hand if you feel safe to do so, and what to do if you don't feel safe helping. We talked about how we've helped before at our house, and we'll do it again if we have to, because that's what shapes you as a caring individual. There was discussion about our paramedics and firefighters and police officers who have chosen to rush to these situations as their life's calling, and how we can be glad there are people willing to do that for us.

Our neighbourhood has presented more than a few moments that have chipped away at our children's (and our adult) innocence. I'm not blaming the neighbourhood, because there's no perfect place to live, especially in a big city. We've had fights. Gunfire. out of control partiers. Kate was confronted with a bike thief on our property once, and threatened with a knife. Car crashes. Domestic situation, with screams heard across the neighbourhood. 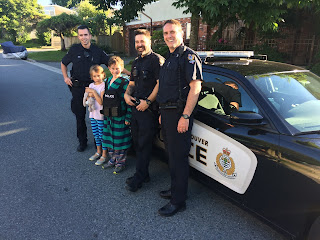 Long story made slightly shorter, we had a rough night in our house. Questions will no doubt continue to arise, and we'll answer them as honestly and thoughtfully as we can, as we always do. It is my son's 9th birthday today. The last day of his 8th year will no doubt go down in his personal history books as one to remember. My daughter wears these moments heavy in her heart and on her psyche, and for sure she'll be analyzing the situation for days to come.

And at the core of it, we'll wonder, together, about "Paul" and pray that he finds some good help, and figures out a safe way forward in his life. Pray for Paul, indeed, and others like him. This wasn't the first call like this the police have had to respond to, and it won't be their last.